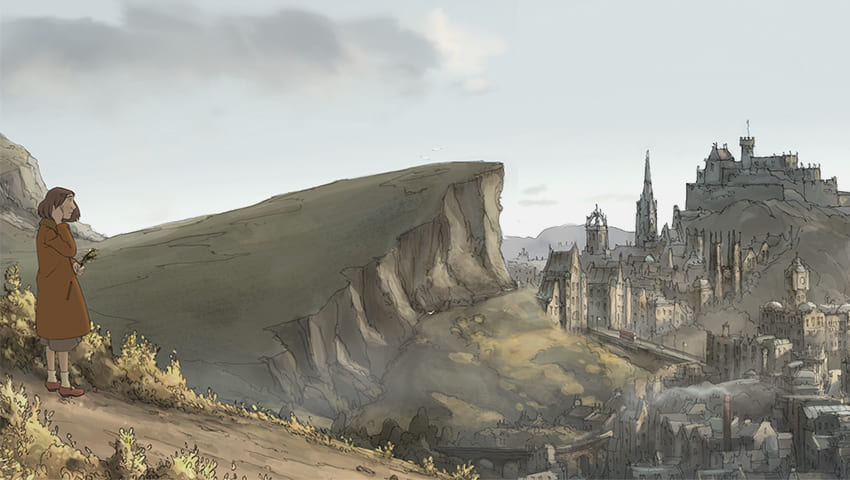 Edinburgh is a beautiful city. No wonder some films take its streets and landscapes as a backdrop for action. Get your popcorn ready for this selection of films set in Edinburgh.

Trainspotting is probably the first film everybody thinks of when we talk about movies set in Edinburgh. There are only a few scenes where you can see the city at the beginning of the film; the main characters run down Princes Street pursued by security guards became very famous. In fact, the film has become one of the most important British movies of all time,  and its soundtrack Instantly recognisable.

Based on the novel of the same name by Irvine Welsh, Trainspotting follows a group of heroin addicts in Scottish society in the late 80s. The rough aesthetic created a personal style which made the film so popular.

There are some particularities about this film. The title is a reference to an episode in the book where two characters were using Leith Central railway station as a toilet. The expression Trainspotting also means in Scottish addict slang “looking for the vein to inject a drug” or it refers to the trip after taking drugs. This slang, as well as the strong Scottish accent, was the reason why they had to re-edit some conversations to make them understandable for the American audience.

Another point of interest, the author of the novel, Irving Welsh, has a cameo appearance as Mikey Forrester, a punk who lives in a room with just a mattress.

Twenty years after the movie was released, both the actors and the director gather together again to make the sequel, T2 Trainspotting, and once again, Edinburgh was the city where the new story takes place.

Hallam Foe may be the movie that offers the best images of Edinburgh in its greatest splendour thanks to the pastime of his main character; a teenager who likes clambering over roofs to spy on a woman because he has fallen in love with her. Besides, he lives in a unique location in the Balmoral Hotel clock, where he has a perfect panoramic view of the Old Town. The film is based on the novel written by Peter Jinks and it won the Silver Bear in Berlin Film Festival for Best Music.

The plot of this film revolves around the last days of the world-famous escapologist Harry Houdini and his obsession with communicating with his dead mother in order to know what her last words were. Houdini´s show is on tour to many cities around the world and arrives into Edinburgh in the 1920s. There, he meets a woman and her daughter who pretend to have paranormal powers. Quickly, the relationship between them turns closer.

Some views of Edinburgh can be seen in the film, for example, the Castle or Arthur ´s Seat but, no doubt the best one is a scene from the top of the Scott Monument, where Houdini does one of his performances. It is extremely interesting to see how Edinburgh looked in the first part of the last century.

This is the newest version and the first comedy treatment of the story of William Burke and William Hare, the two infamous murderers who lived in Edinburgh in the 1820s. Many city tour guides, as well as the movie, remind us of what happened with these two Irish immigrants who worked providing dead bodies to the Medical College. The University of Edinburgh was universally renowned at that time for medical science. It was very important to have material for dissection in order to study and teach anatomy. Burke and Hare were aware of such a business (a fresh dead body was worth a lot of money) and decided to get more corpses in a faster way – killing people.

Their macabre plan resulted in 18 murders before they were finally arrested. However, the evidence against the pair was not overwhelming, so police offered Hare immunity from prosecution if he confessed and agreed to testify against his friend. And so he did. Hare was found guilty and he paid for all these murders on the gallows. Ironically he finished as all his victims had; His body was donated for students to dissect. Nowadays his skeleton is displayed at the college’s museum.

That is roughly the plot of the film, which also alludes to another popular character – the dog Bobby, who appears in a scene watching over his master´s grave while Burke and Hare are trying to steal a corpse from Greyfriars cemetery.

The Illusionist is the only animated movie set in Edinburgh. Many artists from all over the world came to the capital of Scotland to work in two studios located in the city. Sylvain Chomet explained how he decided to move the location of the story originally set in Czechoslovakia, to Scotland after visiting Edinburgh for the first time and falling in love with the city and especially, with the variety of colors in the sky.

The story of The Illusionist was created from an unpublished script that Jacques Tati, a French actor and director, wrote in 1956 (in fact the main character is based on this artist himself) and it tells about the relationship between a magician and a young girl.
The Illusionist is a must-see film for those who love the city.

At The Pack Language Experience, we recommend that you watch these films in their original versions in order to improve your listening skills. If you would like to visit all these scenarios in person, come and join our language immersion trips in Edinburgh!