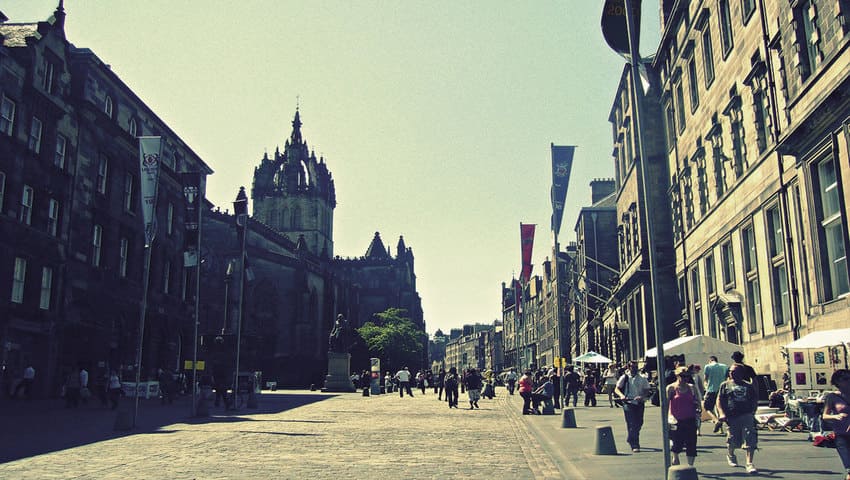 Walking through the streets of Edinburgh

Edinburgh is, after London, the most visited city in the UK. And this is not surprising if we consider everything has to offer. Thanks to its culture and its beauty, Edinburgh is also known as the Athens of the North. The city centre is divided into two distinctively different areas: the Old Town, (declared a World Heritage site by UNESCO) whose labyrinthine streets contrast with the perfect order of the New Town, a part of the city built in the eighteenth century based on neoclassic urban planning.

In the Old Town, you will find the Royal Mile, the main street that connects the Castle to Holyroodhouse Palace. When visitors walk along this mile they will discover the true history of the city. We will start our walk at the famous Edinburgh Castle, which lies on a volcanic rock making it the perfect symbol for Scotland. Kilts are another great symbol of this country and quite close to the Castle you can find an old factory (which today has been converted into a shop and museum where kilts are still made with different patterns and tartans to distinguish the different clans. Here you can see the evolution of the most iconic garment in Scotland.

Walking further down just next to St. Giles Cathedral, we stop and look down where we find the Heart of Midlothian; a heart-shaped mosaic formed in coloured granite setts, built into the pavement. A tollbooth (prison) once stood on this site, where executions used to take place. According to tradition, people spit each time they pass by the Heart (just as prisoners once did as they were being taken to be executed in this very square). In doing so it said that the visitor will one day return to the city. Others say that it will help you find true love. Either way, it is worth giving it a try so don´t miss the opportunity!

“Edinburgh is a dream of great genius“

The closes or wynds are the most iconic part of the Royal Mile. Each of them has its own name and story, one of the most famous being Mary King´s Close. Today this close is found beneath the current City Hall but, back in the seventeenth century, this was one of the most crowded places in the Old Town, a place where many people died not only because of the public executions but also because of the Black Plague. All this death and dark history has given birth to many of Edinburgh’s legends and ghost stories.

If we continue with our tour, we will find all types of businesses; pubs, souvenir shops (some of them quite interesting and unique, such as the ones specifically dedicated to selling Christmas decorations, open all year round) and little museums. Some of them are the Museum of Childhood or the Museum of the City, both of which are free entry. It is towards the end of this popular street where a very modern building is found, in juxtaposition to the old and historic building surrounding it: It is the Scottish Parlament, built by Catalan architect Eric Millares.

The Scottish Parliament is quite a controversial topic among Edinburgers not only because of its design but also for the quantity of money spent on it, being ten times more that the original budget. We suggest you visit the building yourselves and reach your own conclusions before finishing up the tour at Holyroodhouse Palace, home of many members of the royal family throughout the history of Scotland and the current residence of the Queen Elizabeth II on her visits to Scotland.

“This is a city of shifting light, of changing skies, of sudden vistas. A city so beautiful it breaks the heart again and again”.

The line that splits the city centre into two has a name: Princes Street. This street is similar to Madrid’s Gran Via. The commercial area is on one side with lots of shops and on the other, the green gardens, a perfect spot to enjoy the city on a sunny day, it’s also the centre of Christmas celebrations and many other events at the foot of the rock of the Castle.

Some main attractions on this street are the Scottish National Gallery or the Balmoral Hotel; whose clock is always running five minutes fast for those travellers who need to catch a train at Waverly station, found just underneath the Hotel, or the Scott Monument, a tower erected in honour of Walter Scott, a very important person in Scottish literature. First opened in 1844, the Scott Monument is 60 meters high and is the highest monument ever made in honour of a writer. You can climb to the top up a narrow passageway of 287 steps but the effort is well worth it. From there you can enjoy a beautiful view of the city. Another spot with a stunning view of the city is Calton Hill , situated at the East End of Princes Street. From here, visitors can explore its different buildings and monuments whilst taking in the magnificent views.

There’s no doubt that the best way to get to know a city is by walking its streets. And the best way to improve a language is to visit a country where this language is spoken so, why not visit Edinburgh and enjoy this beautiful city while practicing and improving your English? Join us on our next immersion trips!