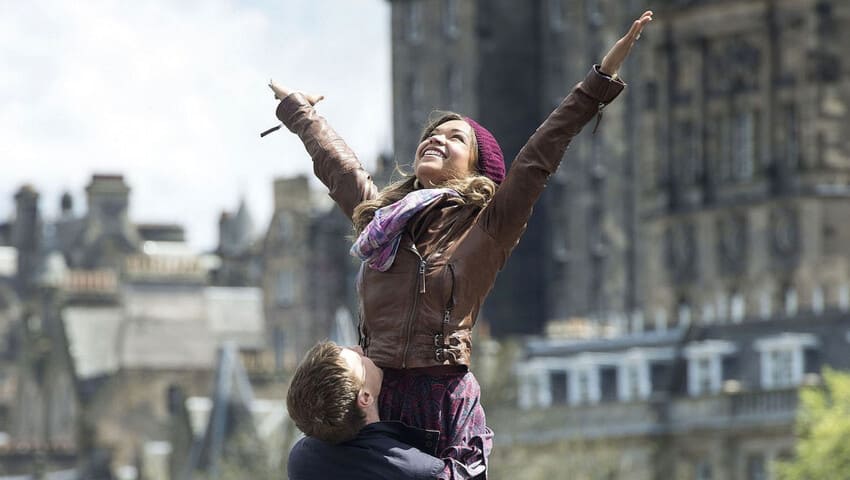 We have already mentioned on this blog that the capital of Scotland has inspired many artists in history and many directors have chosen Edinburgh as the perfect setting for their movies. Here are some more examples proving that Edinburgh is indeed a movie city.

The 15th July, is the date on which we get to know the lives of the main characters, a couple who meet after their college graduation in 1988. After that night, their lives evolve in different ways but they remain friends. By portraying that exact day across the years the movie builds a love story with a beginning and an end situation in the same setting, Edinburgh.

There are some beautiful shots of the city, especially during the first 5 minutes of the film. It is not the typical romantic movie with a happy ending, but once you have seen it, you end up with a good feeling.

The first thing we need to know about this film is the meaning of its title. During the process of making alcoholic drinks such as wine or whisky, those drinks are usually stored in oak barrels; when alcohol is stored for long periods of time at 60 percent humidity or higher, some of this alcohol evaporates and this is what it is called the angel’s share, alluding to the belief that guardian angels watch over the product as it ages. After this explanation, you already know that whisky will be very important in the story about a young Glaswegian father and his friends from the community payback group.

Apart from the whisky there are lots of other images conveying the Scottishness of this film: the famous Irn Bru, kilts, and the unmistakable Scottish accents which are as strong as in Trainspotting. It is definitely a good and funny movie made in Scotland.

Cloud Atlas tells five different stories that happen at different times, with different characters played by the same actors. One of the most interesting aspects of the movie is the characterization by well-known actors such as Tom Hanks, Halle Berry and Hugh Grant. Sometimes, it is quite difficult to recognise them so you have to wait until the credits at the end of the film to see all their different roles.

The plot comes from the same writers as The Matrix so this gives you a hint about the complicated and sometimes fascinating stories they tell. The best words that describe this film would be “time”, “past”, “present”, “future”, “déjà vu”…all in one sentence: Everything is connected.

Cloud Atlas is part of this selection because Edinburgh is the place where the story of a musician called Robert Frobisher is set. Princes Street and the Scott Monument are clearly visible as well as the outskirts of the city.

Sunshine on Leith is a new version of the musical with the songs of a well-known Scottish band The Proclaimers, from this part of the city. The film tells three love stories through the songs of the band. Edinburgh plays an important role because it is the setting and the stage where the action takes place. The aerial images are especially remarkable, enthralling the audience with fantastic views of the city. These panoramas are truly emotional and stunning. Sunshine on Leith is an entertaining film, perfect for a Sunday evening.

Once more, Irvine Welsh is true to his style in this story about a bipolar, bigoted junkie cop obsessed with promotion.  Just as in Welsh´s most famous title, Trainspotting, Filth portrays in detail the depths of misery to which a human being can fall.

A strong Scottish accent, a very acid sense of humor, sex and drug scenes, as well as verbal violence, are the ingredients which make you laugh and at the same time, feel abhorrence.

The main character in the movie is played brilliantly by James McAvoy who succeeds in evoking sympathy in us at some points to the extent that we end up feeling sorry for him.

At The Pack Language Experience, we recommend that you watch these films in their original versions in order to improve your listening skills. If you would like to visit all these scenaries in person, come and join our language immersion trips in Edinburgh!