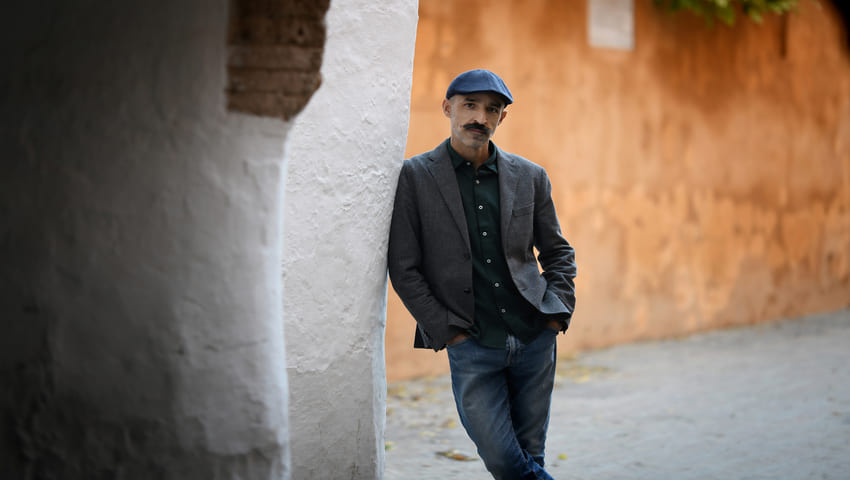 Jesús Carrasco’s (Olivenza, Badajoz 1972) stunning debut novel Intemperie (Out in the open) was published in 2013.  It was hugely successful and translated into 28 languages. A comic book and a film were also made. He won the EU literature prize with his second book, La tierra que pisamos (The earth we tread). Now, his third novel, Llévame a casa (Take me home) has been published and it is a heartfelt story about family relationships.

How did you feel after receiving critical and popular acclaim following the publication of your earlier novels?

Mainly gratitude but in the early days some anxiety too. There were many feelings, all at the same time. It is also important to distance yourself from what you read. One shouldn’t take everything you hear too seriously – either good or bad.

Your name has been linked to a new Spanish literary style known as neorruralism. How would you define this style?

I can´t define this style because I don’t think it applies to me. I didn´t create a new movement, I have simply written about my own and natural space. The coincidences with other authors have been highlighted by the media. I suppose what we have in common is our desire to put the Spanish rural environment to the forefront of our novels. Apart from that our books are very different from one another.

You hold a Bachelor’s degree in Physical Education and have worked in many areas including graphic design and advertising. When did you decide you wanted to be a writer?

I can´t pin-point the exact moment. There wasn’t a book that helped me decide to become a writer. It was a process. You have to feel your way, firstly being aware of your own limits and then, little by little, possibilities appear. The main factor is reading. A love for books makes you become someone who wants to write those books.

What are the best and worst things about being a writer?

In my case, the best thing is the feeling, which is rare, when I know I have created writing of value, and being appreciated for what you have created A story which starts from nothing and, after months or even years of work, is ready to be read by someone. Another very positive aspect of this profession is that you have the chance to approach those you admire, be it writers, book sellers, journalists, editors, translators and of course readers.

Your third novel is called Llévame a casa (Take me home) and takes place in a small village in the province of Toledo. The city of Edinburgh also plays an important part in the story. Both places have been part of your life. How many autobiographical references does the novel have?

Both are places where I have lived. As a result, the novel already has some autobiographical references. There are even some familiar episodes within the novel but I won´t say which ones. Juan, the main character, has setbacks which are similar to my own setbacks. I also spent a lot of time washing plates in some Edinburgh restaurants and I too fell in love with the Botanic Gardens.

Llévame a casa is focused on family relations. Do you think these bonds are stronger in Spain than they are in other countries?

I personally believe that the Spanish have a unique way of relating to one another in a family. A particular way that, in Europe, we may share with the Greeks, Italians and Portuguese. Your family is something that is part of you forever. When I lived in Scotland I noticed a much clearer separation from family when young people go to university or when they find their first serious job.

For someone who lives abroad, where is home?

The question is too general. Each person has their own individual life circumstances. As far as I am concerned, my home is where my wife and daughters are.

How was your experience of learning a new language and living in another country?

Intense. With ups and downs but, in general, very positive.

How would you describe Edinburgh?

This is a difficult question to answer. I already show my feelings towards the city in the novel. Anything I say about Edinburgh is conditioned by the love I feel for the city. It has been our home for three years. It welcomed us with open arms. I love the colour of the buildings, the big parks, I liked going up Corstosphine hill to admire the city from the “Rest and Be Thankful”, the same place where the main characters of Kidnapped by Stevenson get separated. I love the endless light in summer, the smell of hops from the Caledonian Brewery, the stove in Teuchters, the 32nd hole in Brunsfield Golf course. The good friends.

What projects do you have in mind for the future?

I am writing an essay about working with hands and, in the future, I might write something about Edinburgh.