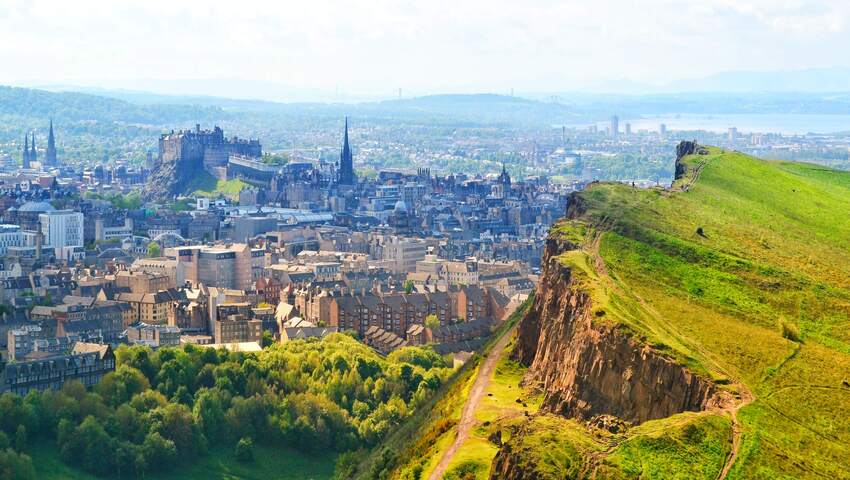 Edinburgh is a city full of secrets, hidden gems, and interesting stories. We encourage you to come with us to discover all the beauty and charm of Scotland’s capital. In the meantime, we have compiled 10 curious aspects about Edinburgh which even the locals may not know about them.

1. One of the city’s main attractions is the statue and cemetery of Greyfiars Bobby. We have already explained the story of this famous dog when we talked about pubs in Edinburgh but did you know that Bobby’s collar is kept in the Museum of Edinburgh, located in the Royal Mile? In this tiny building, you can also see the bowl from which this famous dog ate.

2. Another famous animal in Edinburgh is Dolly, the first cloned mammal in history. She was born in the outskirts of Edinburgh and nowadays the sheep is exhibited in the National Museum of Scotland.

3. As well as Bobby, there are other animal sculptures around the city. One of them is the Lion of Scotland, by Ronald Rae, located in St Andrew Square. The granite carving weights 20 tones. The giraffes located at the door of the Omni Centre are affectionately known as Martha and Gilbert. This piece is called “Dreaming Spires” by the sculptor Helen Denerley. Another famous animal sculpture is Wojtek the polish soldier bear in Princes St. Gardens.

4. The Scott Monument is 61.11m high and there are 287 steps to the top which you can climb. It is the highest monument in the world erected to a writer (Sir Walter Scott).

5. Just a few steps from the Scott Monument is Waverley Station and its Bridge – the only station in the world named after a novel. You can understand how important Walter Scott was to Scottish literature.

6. As well as Walter Scott, Edinburgh has been an inspirational place for many other writers. One of the most contemporary and famous is J.K Rowling. The Harry Potter author started to write about the adventures of the famous wizard in many cafes around the city. The Elephant House is considered to be the birthplace of Harry Potter. At that time, she was almost broke. A few years later, in January 2007, Rowling left a note in a room at the Balmoral Hotel (the most luxurious hotel in the city) to announce that she had finished the last Harry Potter book there. Now she is one of the richest people in the world.

7. The most important street in the old town is the Royal Mile. The street covers the distance between Edinburgh Castle and the Palace of Holyrood (one mile of length) and is full of narrow alleys and closes often named after an important resident who lived there.

8. John Knox House and Moubray House, located in the Royal Mile, are probably the oldest houses in Edinburgh. They give us an idea of what the city looked like around 1600.

9. Also in the Royal Mile, a former prison stood on the site close to the Heart of Midlothian. Spitting on this mosaic when you walk through the Royal Mile is a tradition. It is said that prisoners used to do this on their way to prison. Nowadays if you spit on the heart, they say you will find true love or return to Edinburgh one day.

10. If you visit Scotland, you must try its national Scottish dish: Haggis which is served with neeps and tatties. There is also something else to try which you surely can´t find anywhere else: the deep-fried mars bars – a weird experiment that became popular years ago and many “chippies” (takeaway shops) sell around the city. It isn´t as bad as it looks!

If you would like to improve your English and discover these and many more stories, join our Edinburgh Pack and enjoy a language immersion week with us!