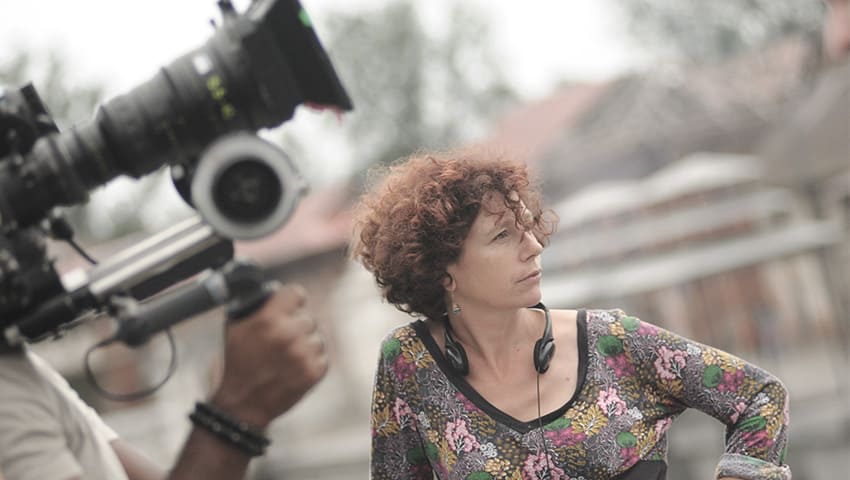 “A language is the expression of a culture”

Icíar Bollaín acted in her first movie when she was just 15. Since then, her name has been linked to Spanish cinema; initially, in front of the camera and then as a director. This Madrilenian living in Edinburgh has always shown us the reality of social injustice. Here we discuss cinema, what Scots and Spaniards have in common, our differences and the importance of language.

You, like us, live between Edinburgh and Madrid. How do you find this way of living?

I have two lives running simultaneously. I have my family in Edinburgh; my sons and partner. I work at home and connect to Spain via Skype as the projects I am involved with are still in Spain. In Edinburgh, I don´t have a work pattern so I am connected to the city through my children’s school, with other parents and with some friends. It is a quiet life but in Madrid, I have my network, my old friends, my mum and siblings… I  don´t spend much time at home when I´m there!

Are Spaniards and Scots very different from one another?

In general terms, we are similar. We have a lot of history in common after all. I think Scottish people are kind but a bit more formal compared to us. They keep themselves to themselves; physically and in the way they socialise. They really appreciate their privacy. They have a social life which is a lot more structured than ours.

We are more spontaneous when it comes to meeting other people. Spaniards are quickly in each other’s pocket, usually in a good way because you can count on others to go out, to give you a hand etc. But sometimes, also in a bad way, because we don´t respect each other´s space as much as here in Scotland. There is a common phrase which is used when someone tells you their problems: “The thing you have to do is…” When I’ve said this to a Scot, they have stared and me and freaked out

It is something natural. My sons talk to me (and amongst themselves) in Spanish and speak in English to their father. Meals are often a mix of both languages. The best thing for me is to see how bicultural they are. They understand the social and cultural codes in both places. At times I can still put my foot in it when I say something so I ask them if it is right or wrong and they laugh. “Mum, that was totally wrong!”.

In your opinion, what is the best way to learn a language?

A full language immersion is obviously the best way, “to be” in the language and try to speak the same way children do, by repeating what they hear with no boundaries. But there are also other ways to learn and improve like watching films in their original version, listening to the radio or reading. I have learnt quite a lot by reading. It doesn´t matter if you only understand half of what you are reading, with time you will learn more and you’ll learn in an unconscious way. You also learn about the culture which is the most important part of learning a language. When we think about a language, we always think about words and rules, but in reality, a language is the expression of a culture. To understand a language is to understand a culture.

The light. Although there is not that much in Winter, it always fascinates me and I´m constantly surprised by the colour of a street, a sunset, a corner in the city…. It is the light of romantic paintings, constantly changing.

How would you describe Edinburgh in just one sentence?

Edinburgh is a fairy-tale city on a very human scale. The city and its people are very accessible.

Your documentary, “In a Foreign Land” is about emigration and the financial crisis through the experiences of Spaniards living in Edinburgh.

For some time, I was hearing a lot in the news about this new wave of emigration and its conflicting figures, so I started to ask myself if this was the same thing that happened in the 60s. I did some research later and discovered a common denominator amongst all the people I spoke to. The portrait they drew about the labour situation in Spain: lack of opportunity, for many precarious working conditions, sometimes even degrading… This situation was clearly horrendous so, although emigration as a theme is crucial, I consider it more urgent to talk about the crisis. “In a Foreign Land” tries to explain what has happened and why.

“Investment in cinema is important for the culture”

Since you were very young you have worked as an actress and in more than 20 films. Do you miss being in front of the camera?

I really love acting and I do it when I have the chance but the truth is that there are not many roles for women over the age of 40. However, I don´t rule out working as an actress again because it is a great and humbling experience. It is very nice to be on other shoots because I learn a lot.

How do you see the Spanish cinema nowadays?

Very well in terms of creativity. I think there are a lot of good ideas. Every year, they make bad, good and excellent movies but, above all, I think there is a lot to tell and many people to do it. There are films with a very high technical level. The problem is that we have a squalid financial system and a lack of political willpower for the cinema to develop solid roots.  Other countries invest much more, they take cinema seriously and they promote culture in the long term. They are clear that investment in cinema is important for the culture.

What does a story need to bring it to the screen?

I always try to choose stories that are interesting and worth telling. When I go to the cinema, I look for something that moves me, entertains me, which teaches me something that I didn´t know and I have never seen before.

Violence against women, emigration, the environment… your films normally discuss social topics and there are always traces of criticism.

When I made “Take my eyes”, I was attracted by something I couldn´t understand on gender violence. I didn´t understand why a woman stays with a man who abuses her, why he does that to a woman who he is supposed to love. What is happening there? When I start telling the story, it becomes a critique but for me, it is more important to understand the whole situation.

In your last films, viewers became emotional with a beautiful story between a grandfather and his granddaughter in “The Olive tree” and enjoyed finding out about the interesting life of Carlos Acosta, the international dancer in “Yuli”. What are your next projects?

My next movie is “Rosa´s wedding”, a simple story with a touch of humour. The story of a woman (just like the protagonists of my first movies) with Candela Peña, Natalie Pozas and Sergi López. I’m also working on another project; a very powerful drama about our recent political past.