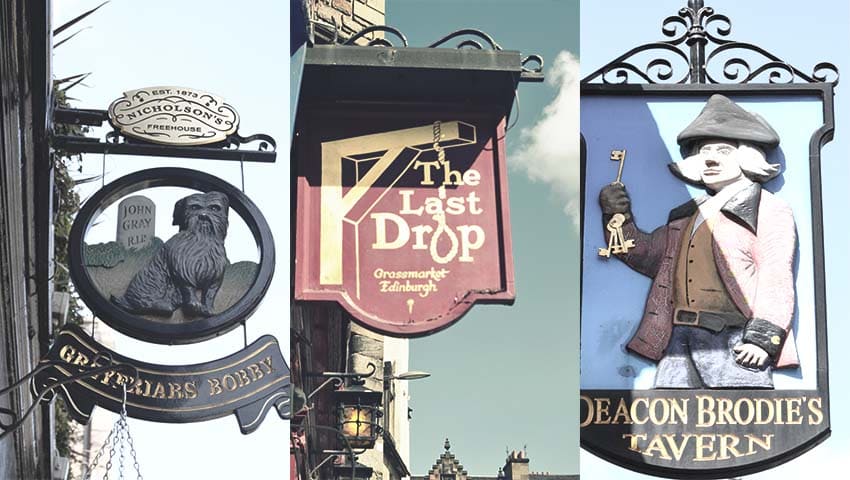 We have compiled a list of 10 of the most iconic pubs in the capital of Scotland – those with interesting stories behind their names or with something anecdotal or historical that makes them somehow special.

Deacon Brodies is located right in the heart of the old town, at the corner of The Royal Mile and Bank Street. The name of the tavern comes from an old resident of the city who inspired Robert Louis Stevenson to write “Dr. Jekyll and Mr. Hyde” . But we only need to have a quick look at its outside wall to learn a bit more about this infamous Edinburgh citizen. William Brodie was a wealthy and much-respected citizen. In 1781 he was elected Deacon Councillor of the city. But at night he was a gambler, a thief, dissipated and licentious. Brodie was hanged from the city´s new gallows in 1788 very close to where this tavern stands. Ironically, he had designed the gallows that ended his life! 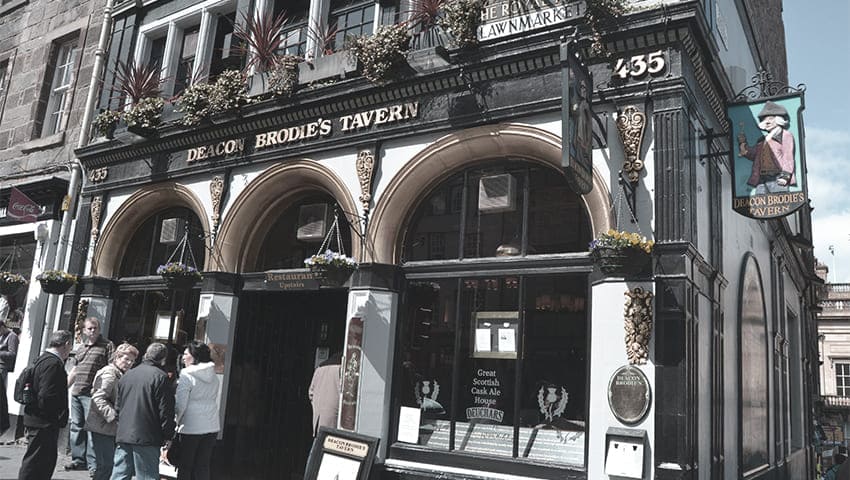 Located in the Grassmarket, The Last Drop is one of the most famous pubs in the old town. Its name and symbol make sense once you realize that the nearby square was the setting for public executions. In The Last Drop, you can order traditional haggis while admiring all the plaques on the wall dedicated to famous Scottish inventors such as Alexander Fleming, famous for discovering penicillin, Kirkpatrick Macmillan, the inventor of the bicycle, John Logie Baird, inventor of the first working television. The pub warns its customers to be aware that “the ghosts of some of the people who were hanged nearby, will be occupying the seat next to you when you visit The Last Drop”. 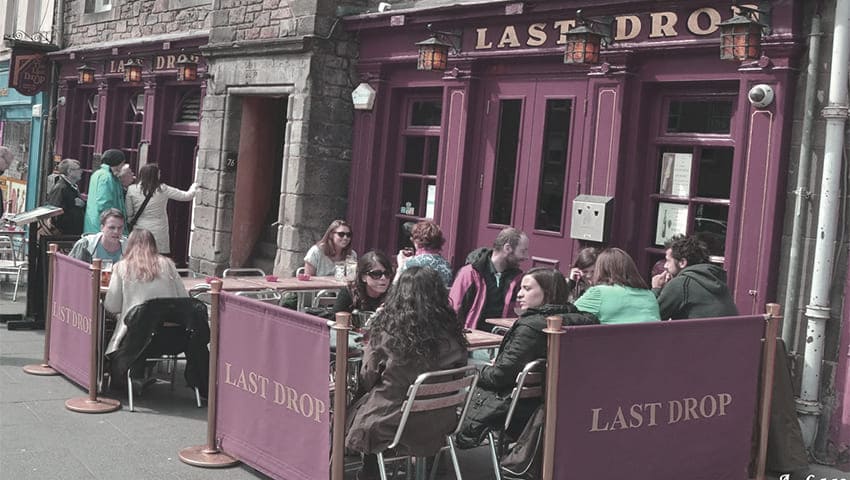 One of the most famous ghosts in town gives its name to another pub in Grassmarket: Maggie Dickson. The story goes back to 1723 when a fish hawker got pregnant but concealed the fact that she was expecting. When the baby was born, he died a few days later. Maggie was arrested and tried under the 1690 Concealment of Pregnancy Act. She was sentenced to be hanged in the Grassmarket. After her death was pronounced, the body was taken to Musselburgh for burial but, on the way there, the mourners heard noises from Maggie´s coffin. On opening the coffin, they found Maggie to be very much alive. On recovery to full health, she was allowed to live, as it was seen to be God´s will that she survived. Living the rest of her days in Edinburgh she was known by all as the celebrated Half-Hangit Maggie! 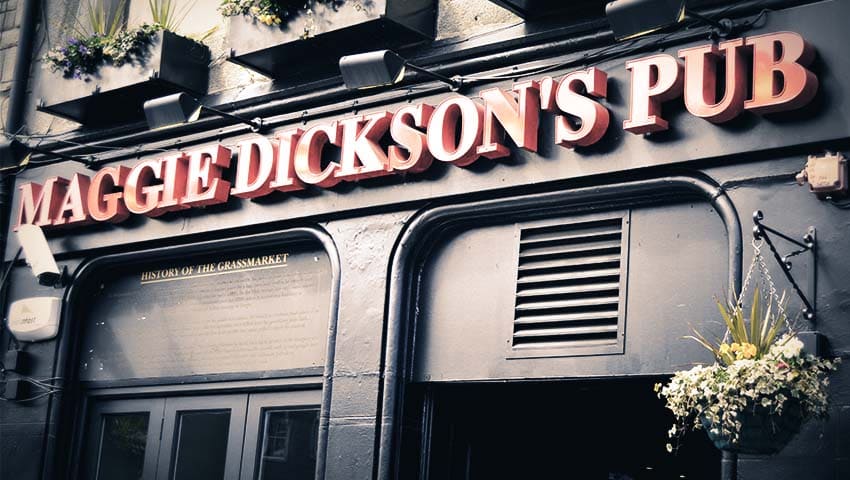 Bobby the dog is one of the most famous characters in Edinburgh, loved by both, children and adults. This little and loyal sky terrier who stayed next to his owner’s grave for more than 14 years until his own death, has a statue to his memory. This statue used to be a fountain for dogs and people. But Bobby also occupies an important place in Greyfiars Kirkyard and he has a pub named after him at its entrance. It is claimed that originally, the statue of Bobby was erected looking the other way but one night, the owner of the tavern turned it around to the current position thus ensuring that all tourists that take photos of the statue have Bobby´s Bar in the background. Great advertising campaign if true! 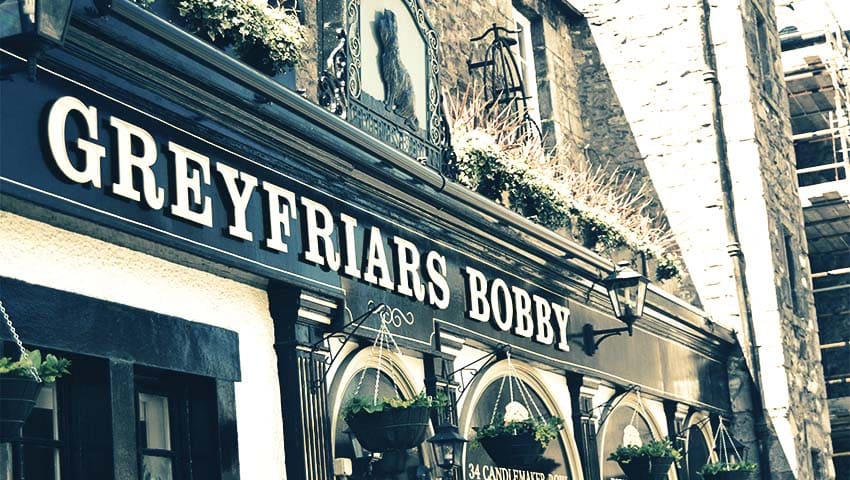 One of the things that surprise visitors is the number of churches and above all, churches that nowadays have been converted to something totally different. A perfect example is Frankenstein, located on George IV Bridge. From the outside, it still has the appearance of a church but, once inside, you find yourself in the laboratory where the famous monster was created. And even that horrific moment when Frankenstein becomes alive is recreated every midnight. The old and classic movie of Frankenstein is played constantly on the screens and creates the perfect atmosphere to make you feel a delightful frisson of fear as you drink.

The Brass Monkey is one of those places that has a great atmosphere no matter when you visit. This pub has a cinema room where daily you can enjoy a free movie with a coffee or a pint. The room has big mattresses and cushions to ensure you are comfy while enjoying a classic film. The walls are all covered with movie posters and four of them are framed: “Tarzan”, “12 Monkeys”, “The Planet of the Apes” and “2001; a Space Odyssey”. Monkeys play an important role in all these movies. As a curiosity, there is a colloquial English expression used when it is extremely cold: “cold enough to freeze the balls off a brass monkey”. That would be a good way to define the weather in Scotland! However, gentlemen need not fear. The expression is said to refer to the brass frame, or monkey, used to store cannonballs in days of old. In really cold weather the brass would contract and spill all the cannonballs. There is another pub with the same name in Leith Walk. 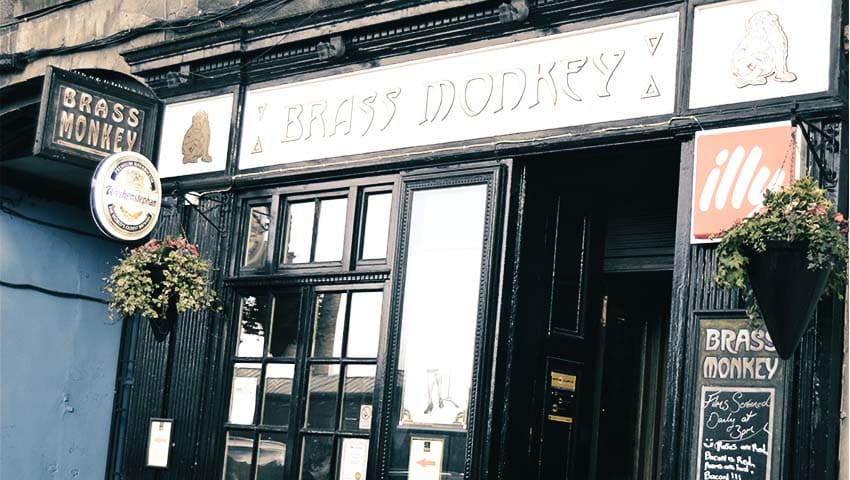 There are many old pubs with great musical traditions in Edinburgh and one of them is The Royal Oak, a small and cosy bar with a compact basement lounge where every day you can listen to live music. Customers sit together to play different instruments and to sing folk songs. This is one of the few bars in town with a license to stay open until 2 am. 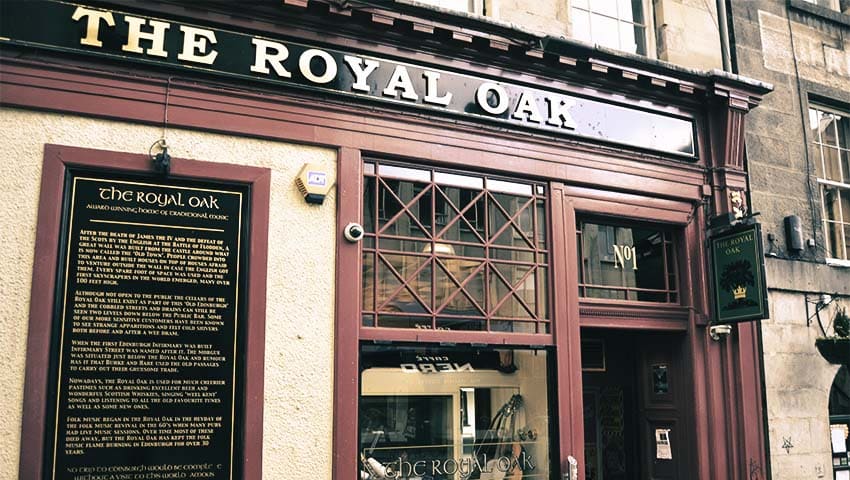 Underneath Southbridge there is a pub that looks like a labyrinth, with small rooms and corridors. The Banshee Labyrinth was once part of the infamous “underground Vaults” where criminals and thieves used to hide. This part of the city is also famous for the presence of ghosts so the Banshee Labyrinth helps to create a creepy and scary atmosphere with its decoration; skeletons, torture chairs and even coffin-shaped tables. One of the rooms is a cinema with a capacity for 50 people. This is another place where you can enjoy a film for free while drinking a pint. 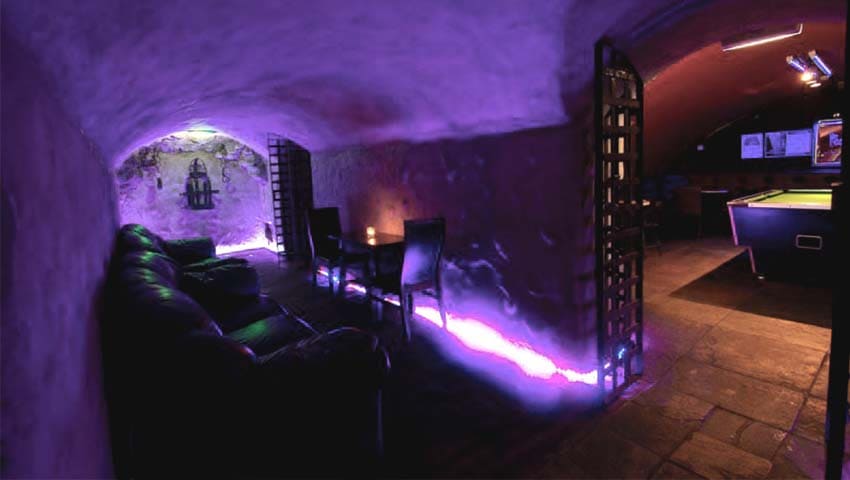 From the old town, we move on to the new town to visit one of the most characteristic buildings in George Street. The Standing Order, a former bank now converted into a pub. This is a huge pub and restaurant which, despite the absence of music, is always full of people. The main room looks majestic and a small statue of a man with a suitcase full of banknotes reminds us what this place was in the past. However, the best indication that this was a bank is the huge vault door that still stands in one of the dining rooms. The Standing Order is a must-visit pub if you like beer because it has lots of types from many countries. 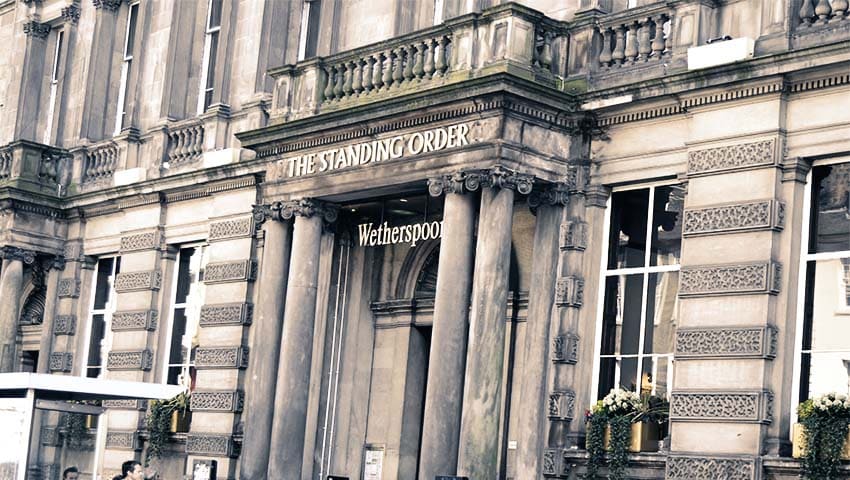 And we finish our tour in the West End, in Ghillie Dhu (This Gaelic name indicates a Scottish woodland spirit or fairy. ) The building has a Georgian dining room that doubles as a dance floor during the weekends and where you can enjoy a traditional Ceilidh. The organ and the huge lamps are also impressive. A must-see visit if you are in this part of the city! 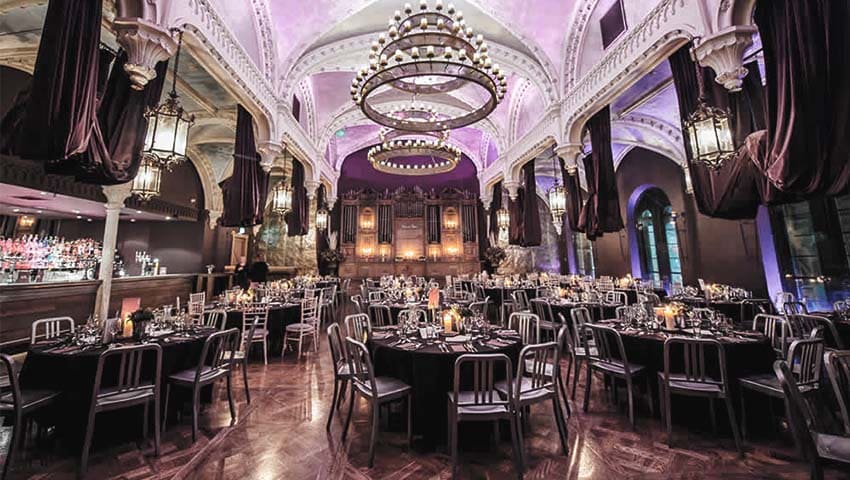