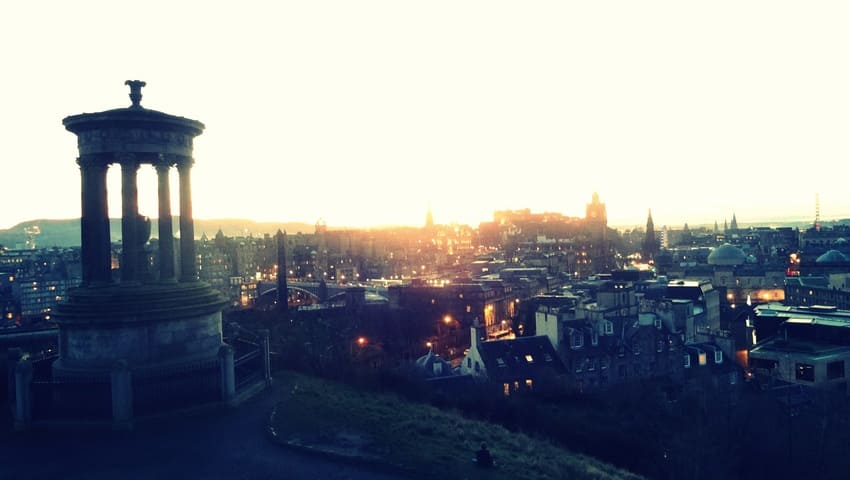 Edinburgh is a magical city with lots of history and curious aspects. We’ve already pointed out some of these in a previous post but, as there are so many, here are some new secrets and interesting facts about our favourite city.

1. Edinburgh Castle is a fortress which dominates the skyline of the city. It was built on top of Castle Rock which was once a volcano. The oldest building in the castle is Saint Margaret´s Chapel. It was built by King David I in the 12th century and was dedicated to his mother who was later canonised. Within the Castle grounds, there is a small dog cemetery used since Queen Victoria´s reign. This was a burial place for regimental mascots and officers´ dogs.

2. “The One o’clock Gun” has been fired from the castle since 1861.  This is a tradition which stems from the days when it was a time signal for ships in the Firth of Forth and the port of Leith. The Gun is timed to coincide perfectly with the Time-Ball, a large white ball which is raised above the Nelson Monument on Calton Hill and drops at exactly 1.00 pm.

3. The National Monument on Calton Hill commemorates the Scottish soldiers who died during the Napoleonic wars. Its design is based on the Parthenon in Athens but, in 1829 the funds to build it ran out and never was completed. it has various nicknames because of these circumstances, Edinburgh’s shame, Scotland’s disgrace, etc.

4. Another small hill in the city is the Mound which was formed 200 years ago from all the earth excavated when the New Town was being built. Every Christmas, a huge tree decorates the Mound. This tree is a present by the people of Hordaland, a city in Norway.

5. New Year´s celebration in Scotland is known as Hogmanay, an expression derived from Gaelic which roughly means “new morning”. Hogmanay brings more than 80.000 visitors every year to the city of Edinburgh.

6. Edinburgh is also well-known for its summer festivals. The Edinburgh Fringe Festival dates back to 1947, when eight theatre groups turned up uninvited to perform at the International Festival. In 1959 the Festival Fringe Society was created in response to the success of this growing trend. Today, this is the largest arts festival in the World.

7. Four tonnes of explosives and over 100,000 fireworks are used in the Fireworks Concert which closes the Edinburgh International Festival every year. These fireworks are choreographed with live music by the Scottish Chamber Orchestra and the concert lasts for almost an hour. One of the most amazing fireworks is the “waterfall” which consists of 70 firing units laid out for 36 metres across the Castle. The display descends 40 metres down the Castle Rock like a waterfall.

8.Another internationally famous festival is the Military Tattoo which is performed every weekday evening and on Saturdays throughout August and has never been cancelled since it began in 1950 until the coronavirus pandemic in 2020. The word “Tattoo” is derived from “tap toe”, the Dutch for “Last orders”.

9. Lothian and Borders Fire and Rescue Service was the oldest municipal fire brigade in the World, founded in 1824 when fire was a constant problem for the city of Edinburgh.

10. In Leith, you can visit the Royal Yacht Britannia, the former royal yacht of Queen Elizabeth II for 43 years. During the tour, over five levels, visitors can see almost every part of the yacht, from the upper levels, private bedrooms and desks to the engine room and working areas. This has been voted as one of the best attractions in the UK.

If you would like to improve or brush up on your English, join our language immersion trips to Edinburgh where we combine English classes with many cultural and fun activities to have a great language holiday.